“Peak” or "Threshold" years, for a common interest community, are those years when there are very large expenses that occur in a very short period of time. Typically this is due to having several components which make up the bulk of their common area expenditures, occuring in a short period of time. For most communities these very large expenses occur infrequently perhaps only every 20-30. Common examples of these are roofing, deck replacement and asphalt overlays all of which are infrequent but extremely costly common area components.

The concern with peak expense years is that most communities have been cruising along in a poor to fair funding level for many years with no significant negative consequences. Over the years communities have many community members come and go, there have been several management companies over the years and the Board, which is making the financial decisions for the community, has seen its typical turnover. The question we most often hear from these communities is: Does “Percent Funded” really matter? That’s a great question because after decades of cruising right along with low HOA dues and a low rserve allocation rate it's easy to become complacent. However I always like to remind Associations that the expenses in the reserve study are real and will happen, there will be a vendor sending out a bill and the money will have to come from somewhere; if not from the reserve account then a special assessment or a loan.

In the below chart this particular community has seen modest expenses for seventeen years until they reach one of their peak years. In this case they have very large expenses for decks & railings. This particular community had several Boards over the years which debated whether decks & railings were really a common area maintained by the Association, several of the Boards decided against funding for them, artificially keeping dues lows and in essence inadvertently penalizing the future members of the community who have to now pay for more than their fair share of the project costs. 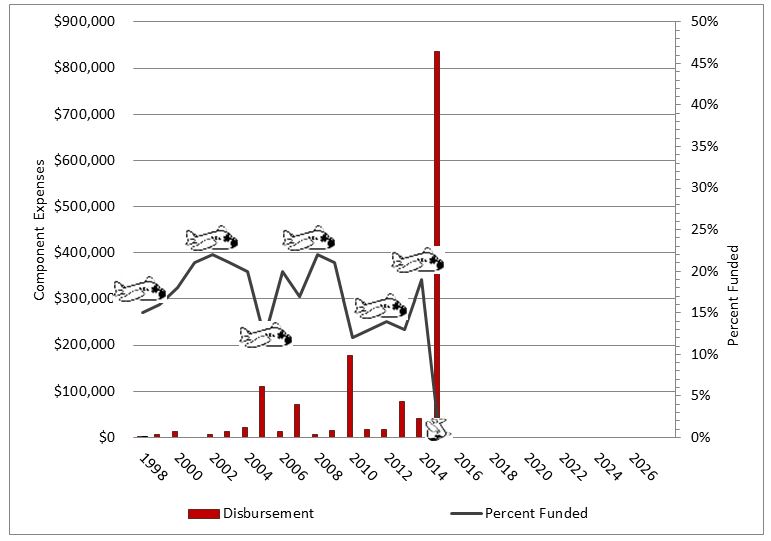 The community members on this plane are, financially speaking, cruisin’ for a bruisin’… To make matters worse it’s the current community members who occupy the plane and not necessarily any of the members/board who decided against funding for the decks & railings in earlier years. This community had to rely on a very costly loan to pay for expenses in this first peak year.

How common is this?.... Very… Boards will come up with a host of reasons to either ignore or put off funding for common area projects; while this keeps HOA dues low in the near term this approach will typically have a devastating impact on the financial health of the community years down the road. In King County (WA) 58% of communities are 16-46 years old, right in that time frame when they are either approaching their Peak year(s) are have just dealt with one. It’s no coincidence that Washington State passed laws requiring reserve studies in 2012; the numbers of communities that have had to rely on special assessments or obtain costly loans to get past their Peak expense years have increased dramatically in recent years.

A troubling trend we see are many of the communities that have had to special assess or obtain loans to pay for these Peak Year expenses are again trying to keep HOA dues artificially low; a consequence of community members being unhappy with recently being assessed and/or watching as large portions of their dues go to paying off loan debt. As can be seen in the below chart this “head in the sand approach” will not end well for this community as they have another round of high expenses in a Peak Year, approximately ten years out but this time at an even lower Percent Funded and now with a loan liability to pay off from the prior Peak Year when a loan was secured. 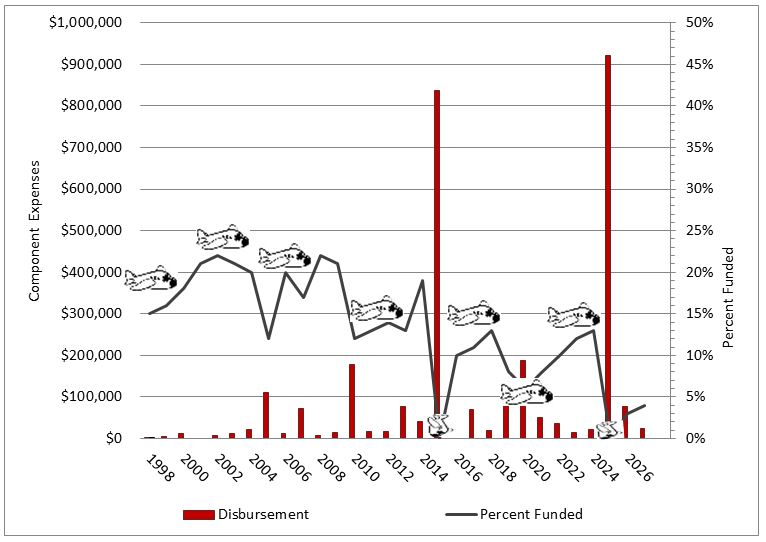 So what’s a community to do? - With adequately planning, realistic HOA dues and a corresponding higher allocation rate to the reserve account, this community would have seen significant increases in its percent funded level for the first seventeen years of this study. The levels would have been high enough that this plane would have made it through the turbulent first Peak Year and again for the second Peak Year. Their chart would look more like the one below, just cruising along with some turbulence along the way but well above the ground…

*** Remember when a Board or a Reserve Study Professional develops a financial strategy, fairness to all members (current & future) should be considered. The best way to do this is to the spread the costs out fairly amongst all members over time. All members have utilized the common areas equally; it’s just the expenses that tend to arise in particular years. The membership in these peak years should not be penalized for being in the wrong place and time on the community timeline.***

In need of a Reserve Study provider to help guide through turbulent time? Reach out to the professionals as Reserve Data Analyst.