I was at a recent condominium meeting and was having a discussion with another gentleman about the important of reserve studies and how I felt they really are very beneficial to a community. Obviously being a reserve study provider this comment is a bit self-serving, but I have chosen this profession as I have found it is something I can stand behind, is helpful in the industry and there is a huge need for advice on these matters. He agreed they could be helpful but scoffed at the idea that the reserve study should be completed for any other purpose than to adhere to statutory requirements. He further stated that he did not believe in the Percent funded calculations in the reserve study and that even a community that has remodeled everything can be considered poorly funded.

I explained to him just as I am about to in this article that he is absolutely correct in that community can still be poorly funded even after major renovations. In fact a brand new community can be poorly funded right from the start. The reason? ---- The Percent Funded calculation in the reserve is based on the need to offset the ongoing annual deterioration of the common area components; and the reserve account allocation rate needs to offset this (monetized) deterioration of the components or the Percent Funded calculation will be less than 100% Funded (very low allocation typically leads to a very low Percent Funded level). Furthermore the Percent Funded calculation is a barometer of the financial health of the reserve account --- essentially we are asking - Is the community on track to cover future projects costs? As I have discussed in another article “Can 96% of a the Membership be Wrong?” a community can go years or decades at a low percent funded level before any significant negative consequences. In fact the vast majority of a community membership may get away with paying much less to the reserve account than is fair, only to have the very few pay for the majority of a project cost via a special assessment, loan or very high HOA dues.

The best way to express the above is in an example. I am going to use nice rounds numbers and am going to ignore inflation and interest to simplify this example. Additionally we are only going to assign one component to this community so again it’s easier to see in the math and the logic in coming to a Percent Funded calculation.

Community "A" has just been constructed has only one component that is the responsibility of the Association – this is the exterior paint of the building. We have a projected cost estimate for this paint job to be $10,000 at the end of ten years, when we estimate a new coat of paint will be needed. Let’s assume the community is like most we encounter and that they are underfunding their reserve and are considered to be 30% funded; instead of setting aside $1,000 per month (an amount needed to offset the annual ongoing deterioration) into the reserve account for this one component they have been setting aside $300. [Percent Funded = $300 / $1,000 = 30%] As you can see in the below graph this community can dramatically underfund the reserve account for Year 1 thru Year 9 with no consequences. However in Year 10 the project expense comes due and those in the community at that time will have to pay for the majority of the project expenses. In fact they will have to pay their share ($1,000) plus an additional $6,000 before the reserve account has enough in the account to pay the paint vendor for the painting of this building. These community members in Year 10 are paying for 70% of the project when they should be only paying for 10%!!! The very troubling thing is that this is not an extremely example for this article; it is common among condominium communities we work with  and is why states like Washington, Oregon, Hawaii and California have passed laws related to establishing a reserve account, funding levels and reserve studies.

So in this example the members in Year 10 are obviously annoyed and do not understand how they ended up footing so much of the bill, but one way or another (let’s assume a special assessment assessment) the Association has obtained the necessary funds to pay for this paint project. The building is now looking great and everyone feels comfortable that the issue is far behind them. “Let’s do a better job of budgeting next time around” is often the rallying cry at this point in time. This is also a common time for us to be contacted to do a reserve study – there is a desire to fix the budgeting mistakes of he past. 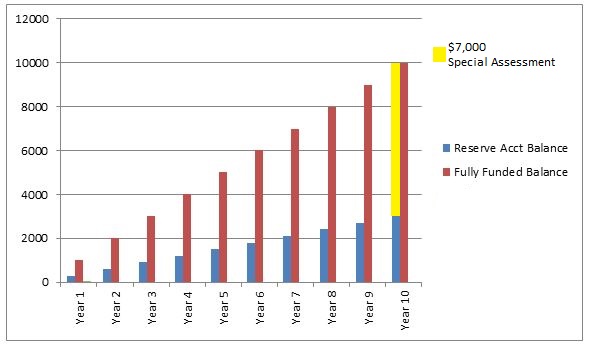 They have dealt with the symptom but not the underlying problem…

So with this new enthusiasm to do a better job of budgeting a community like the one above will initially be very open to the idea of having an independent source provide a professional opinion in a reserve study. However many communities are not prepared for the typically outcome of the reserve study. What is that? –Well it’s that the reserve account is still poorly funded. We have come back to this question of "How can a community which is newly renovated (new paint) still be poorly funded?"

To answer this lets expand out the above graph to 20 years; the paint project has been completed in Year 10 with the majority of the bill being paid for from a special assessment. In Year 11 the cycle starts over but unless this community significantly increases its reserve allocation rate they are simply going to be right back into the same situation in Year 20 (severely underfunded and another special assessment). Typically the Board will have a very difficult time passing any significant dues increase in Years 11 and 12 as the members just paid a large special assessment. When we have completed the reserve study and state that the reserve account is only 30% funded (Year 11 Balance $300 versus an ideal $1,000) we are typically faced puzzled looks…

It really just comes down to simple math at this point. If the reserve account allocation rate is not increased the budgeting dilemma has not been fixed. The special assessment only fixed the symptom of not having enough money at a particular point in time. It did not address the low percent funded level or put the community on a better budgeting path. They will need to have significant increases to the allocation rate to the reserve account (correspondingly the HOA Dues Collected) for them to see any significant change in their percent funded level. 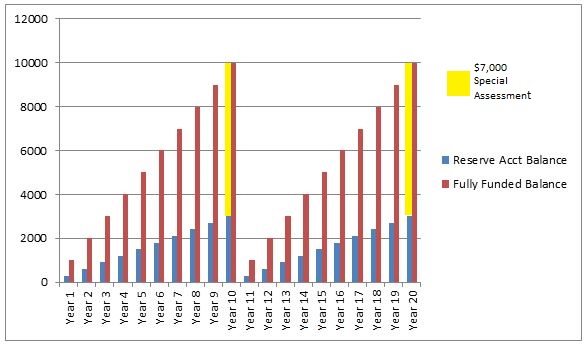 What is with wrong with relying on special assessments?

We as reserve professional must take into account fairness to the community membership (National Reserve Study Standards) over the life of the study. In the above example the majority of the membership (18 out of 20 years) paid far too little, only to have those in Year 10 and Year 20 have to make up for it via special assessments. This is not fair to those in Year 10 or Year 20 – they should not be penalized for living in the community in these years. The vast majority (90%) of the paint deteriorated in the years when the reserve allocation rate were set artificially low. In our reserve studies we will develop funding models that fairly distributes the costs over time.

Additionally there is a high risk for deferred maintenance when a special assessment must be passed. There is often a delay in the project due to a lack of votes to pass the special assessment or a desire to try and save enough via the normal dues collected. This often backfires as the delay only results in a higher project costs (annual inflation) and a higher risk for damages to other areas of the building. In this case a paint project that gets delayed for a couple of years could result in siding damage or water intrusion issues where caulking would have been re-applied. This usually means an even higher project cost and further delays or an even higher special assessment than what was originally trying to be averted.

So in closing the above example is exactly how a community, with completely renovated common areas, is still in a financially precarious position. The reserve account balance remains at a poor funded level and the majority of the community members have not paid their fair share into the reserve account.